The ACCC (Australian Competition and Consumer Commission) launched legal action against Baiada Poultry and Bartter Enterprises which supply the Steggles brand.  KFC Australia and Steggles websites stated that chickens raised for KFC are “Free to Roam”. KFC quickly pulled all mention of the “free roaming” birds from it’s website, yet Steggles still maintains that it’s chicken’s “roam free in large barns. No Cages at Steggles.” While there may be no cages within the cage that is a Steggles barn, the fact remains that the ACCC saw through the claims, realising that due to the number of chickens within one of Steggle’s barns, there would be no “free roaming”.

Please take a moment to tell Steggles that like the ACCC we’re not dumb enough to believe their false claims. Contact form here.

While you’re at it you can write to KFC Australia and tell them to stop the abuse. 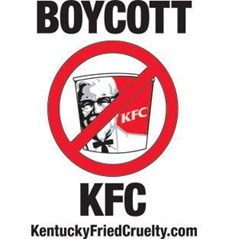 A Few Facts about KFC:

KFC likes to hide behind it’s “Animal Welfare Advisory Committee”. Many of the members have resigned due to frustration, one of them Adele Douglas told the Chicago Tribune that KFC “never had any meetings. They never asked any advice, and then they touted to the press that they had this animal-welfare advisory committee. I felt like I was being used.”

While you may not be a PETA supporter, this video really gets to the heart of the way Steggle’s and KFC treat their chicken’s. Please watch, pass on and learn. This is the first animal abuse video I ever watched and was truly the start of a life change for me personally. 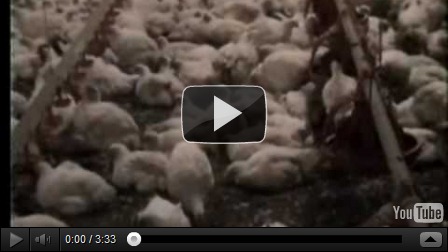