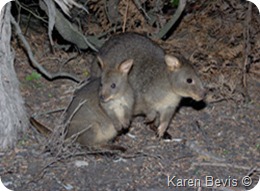 An estimated 500,000 animals are killed each year in Tasmania according to the new Tasmanian Wildlife Matters kit, which is being posted to every primary and secondary school in the state. The estimated number of half a million gives Tasmania the worst statistics in Australia, though at just an estimate and only listing those visible on the road the real number could be much higher. Wildlife Matters says that the true number could be closer to one million with many injured animals leaving the road to die and being removed by carrion eating species. The educational kit states that 1.4 million pademelons, Bennet’s wallabies and 300,000 possums are killed under permit and others poisoned each year, while 3 million animals are killed by motorists, farmers, hunters and the forestry industry.

Karen Bevis from Against Animal Cruelty Tasmania (AACT) stated that “There is a lot we can do to avoid much of this killing by changing attitudes and adopting safer driving techniques, such as slowing down at night and in high-risk areas,” while Peter McGlone of the Tasmanian Conservation Trust said he was hopeful of changing attitudes and had found that even the older generation of farmers were questioning their habits. Bevis also noted that “Orchardists have found that netting to protect their crops from birds pays for itself within a few years.”

You can find more information here:
Highlights of the worst blackspots at roadkilltas.com
Download the Tasmanian Wildlife Matters kit from wildlifematters.org.au
Get involved with AACT, they’re looking for Tin Shakers for Saturday, July 28th! Go to the event page, contact info@aact.org.au or call 0408 70 359.