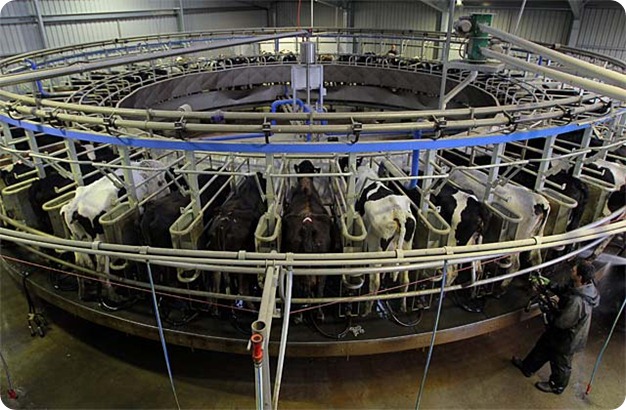 Chinese investors will be buying up big in prominent Tasmanian “dairy land” for a $180 million expansion of a Woolnorth property in North-West Tas. While there are concerns about foreign investors taking up Australian opportunities the Tasmanian Farmers and Graziers president, Jan Davis said “ Foreign investment is seen by many as Australia selling off the farm, the TFGA does not share that view. Expansion requires funds and these investment opportunities are often not being taken up by Australians.”

While foreign investment may not be seen as a threat to Australian farmers by some, it should be a major concern for all Animal Activists, with VDL, Australia’s largest dairy farm company being the majority shareholder of the Woolnorth property, wanting to add another 29 farms to the
19 000ha grounds, complete with a total of 67 500 dairy cows with the capacity to process up to 40 per cent more milk for Tasmania. The company produced 5.76 million kg of milk solids last year and plans to double milk production. Last month the Tasmanian dairy industry stated they wanted to boost milk production from 350 million litres to 1.15 billion litres. Not only is this a devastating move for the cows concerned, in order to carry out the expansion 7 000ha of native vegetation will be cleared which will have a huge impact on threatened species in the area.

Australian Greens leader, Christine Milne stated “We want to make sure that vertical integration from the farm, to the processor to the Chinese consumer does not constitute ‘out sourcing’ and distort markets for land and dairy products. What is additionally worrying is that the proposed expansion of the VDL company would be dependent on clearing 7 000ha of native vegetation – and stands in direct violation of our clearing laws and federal laws on threatened species, the Tasmanian Devil in particular.”