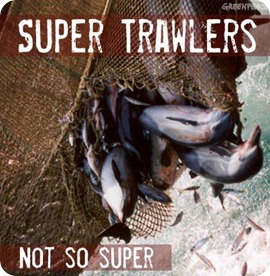 It’s official, Federal Environment Minister, Tony Burke has given the go ahead for Super Trawler, FV Margiris to fish in Australian waters. To add insult to injury the Trawler is being renamed the Abel Tasman.

Burke announced that the ship will be allowed to trawl for its quota so long as it meets certain conditions, including no dolphins are to be caught in its nets. Australian Marine Conservation Society Spokeswoman, Tooni Mahto said “Until we get a clear understanding of what format this review process will take, we’re unconvinced the conditions go far enough to ensure the full protection for marine wildlife.

“If Minister Tony Burke hasn’t got the spine to stand up for the marine environment, and to take on the Dutch super trawler to stop it from operating in Australian waters, then the parliament must take direct action. The only way to stop this monster trawler from potentially depleting our local fish stocks and threatening marine life such as seals, dolphins and penguins is for the Senate to disallow and suspend the fishing quota when parliament sits next week.” – Green Senator for Tasmania, Peter Whish-Wilson.

New information released this afternoon states that the death of a dolphin will mean bycatch mitigation methods will be reviewed and fishing halted within 50 nautical miles of where the death was recorded. An underwater camera will be monitoring bycatch 24 hrs a day and an observer will be onboard the vessel. The Abel Tasman will also be banned from sea lion hunting grounds. Before fishing commences Seafish Tasmania together with its Dutch Owners must draw up management plans concerning seal, seabirds and net-setting rules.

Wilderness Society campaign manager, Peter Owen stated that these conditions showed Tony Burke had accepted the killing of protected species. “This is extremely disappointing, to be entertaining the deaths of dolphins, sea lions, seabirds and protected wildlife is surely out of step with community expectation in 2012.”