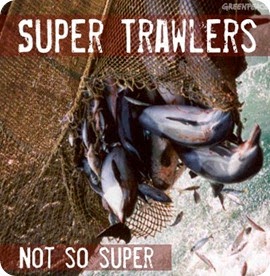 Written by Sophie Wood
So you thought Tasmanian fish had been spared the super trawler’s nets? It turns out there is a Ukrainian-owned ship heading our way in a matter of weeks. Introducing the 4400 tonne Dominican registered ‘Meridian 1’. Measuring 104 metres long, it is one of the biggest ships to fish in Australian waters. The vessel has been chartered by two sea food companies: Tasmania’s Petuna Seafoods and New Zealand’s Sealord.
Both the companies and the super trawler have attracted controversy and criticism from Australia and overseas. For instance ‘Greenpeace’, an independent campaigning organisation, give frightening statistics relating to a fleet of super trawlers fishing off West Africa. Over a 15 year period Greenpeace estimate that the bycatch or waste fish from these vessels included: ‘1,500 critically endangered turtles, more than 18,000 giant rays, and more than 60,000 sharks.’ Regardless of the main catch, the unwanted waste fish were all killed. It is very likely that the so-called waste fish in Tasmanian waters, protected or otherwise, will meet the same grisly fate.

The organisation, PETA, People for the Ethical Treatment of Animals, describe the negative impact of fishing. Quoting from a scientific report it states that fish, like other living creatures, have the capacity for pain and suffering and when brought to the surface ‘… they begin to suffocate. Their gills often collapse, and their swim bladders can rupture because of the sudden change in pressure.’ Arguably moral-minded people, such as vegans and vegetarians, find this practise abhorrent.
For the above reasons it is important to curb the activities of the super trawlers operating in Tasmanian/Australian waters. In 2012 the super trawler ‘Margiris’, renamed the ‘Abel Tasman’ –  perhaps to make the ship more user-friendly for the Tasmanian public – was given a two year ban by the Federal Government so that it could not fish in our waters. This ban expires in November of this year. It would be a travesty to allow this ship, the second largest factory ship in the world, to plunder and rape our fish stocks.
There are calls to extend the ban on super trawlers. It was pleasing to see that there was overwhelming support from a union of 20 international, national and local groups such as Greenpeace, Environment Tasmania and the Australian Marine Conservation Society. This was considered a significant victory for Tasmanians.
See the full story by checking out our previous articles on Super Trawlers in Tasmanian Waters:
New Support and Name for Super Trawler
Stop the Super Trawler
Victory! Super Trawler Banned